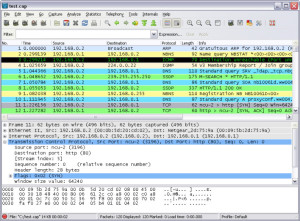 This is a place for scripts and tools related to Wireshark / TShark that users may like to share, and for links to related NetworkTroubleshooting tools.

You will find additional development related tools in the Development page.

Some command line tools are shipped together with Wireshark. These tools are useful to work with capture files.

Tools related to NetworkTroubleshooting and alike.

The following tools can process the libpcap-format files that Wireshark and TShark produce or can perform network traffic capture and analysis functions complementary to those performed by Wireshark and TShark. In brackets you will find the program license and the supported operating systems.

This is another collection of traffic generators: http://www.grid.unina.it/software/ITG/link.php

These tools can be used to 'anonymize' capture files, replacing fields such as IP addresses with randomized values.

There's a categorized list of anonymization tools at the CAIDA site.

These tools attempt to repair damaged capture files as much as can be done.

Currently, raw USB traffic can be captured with Wireshark only under Linux, macOS, and Windows; see CaptureSetup/USB. If it's an Ethernet (or any other network related) USB adapter, Wireshark can capture e.g. Ethernet traffic from that USB device if the platform supports it (which it usually will do). On Win32 you can however try:

I'm using Wireshark 1.6.7 and 1.5.0, and I noticed an anomaly. After loading a capture file that consists of 300K+ packets, I use the Expert Info feature to check the file for retransmits, duplicate ACK's and other warnings or errors within a TCP stream. It shows no errors or warnings. Then, I use the TCP Stream Time sequence (Stevens♔) feature to generate a time sequence diagram. On my first captured file, I see a nice straight line starting from lower left and moving to upper right corner. Everything looks good. In my 2nd, 3rd, 4th files, I see a straight line at the top of the graph with NO sequence number scale on the left side of graph.

Now here is the anomaly: If I skip to the bottom of the file or wait for some unknown period of time and then regenerate the time sequence (Stevens♔) graph for the same file, it actually turns out to be a line starting from the lower left and moving upward to the upper right..like I would expect it to be. Further, the Expert Info for these shows no errors and no warnings. Any ideas?

♔ Time-Sequence Graph (Stevens): a graph of TCP sequence numbers versus time. This helps us see if traffic is moving along without interruption, packet loss or long delays. Reference: TCP/IP Illustrated by W. Richard Stevens
http://sharkfest.wireshark.org/sharkfest.09/bu-9-tompkins-gearbit-wireshark_charts_&_io_graphs-sharkfest09.pdf